Château de Vaulogé through the centuries

At the beginning of the 15th century, in the heart of a small valley wound by the river Gée, Jean III de Vaulogé built the castle, defended since the beginning of the 17th century by broad moats - fed by the arms of the river - and by crenellated walls. One entered to west through a gate preceded by a draw bridge. The basse cour was organised around an ensemble of barns, olive-mills, stables and hay-stacks that delimited the farm (rye, wheat, oats, hemp, white wool, wine, etc.) and was completed by the ingenious mechanism of a mill, the wheel of which was fed by the water from the spillway of the moats originating in turn from Gée.

The initial castle had two wings set at right angles. The main rectangular building is overhanged by a tower that incorporates a surprising stone staircase. Attached to the tower, a turret, which shields a small staircase, hides at the top the paradise room from where one can keep a watch on the surroundings. The large kitchen with a big fireplace was one of the main rooms of the castle where the owners took their meals and spent most of their time. Fish, game, poultry, pig, rye bread and wheat, wine and cider where the daily products found on Sir de Vaulogé table. Oriented east-west, the main residential block offered the lords of the land the convenience of double illumination and the pleasure of performances in the gardens that unrolled like a green carpet in the cour verte. The moats provided mirror-like pools that finished off the composition reflecting the image of the facade. 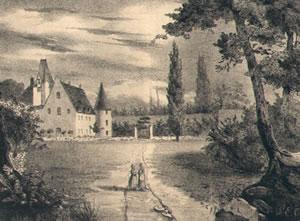 Since 1462, the lords of Vaulogé had the authority to mete out justice (feudal rights that they maintained until the Revolution), therefore a two-stories high prison with an original pyramid shaped slate roof was built at the edges of the moat.

In the late 18th century, René-Charles-Joseph de Vahais, page of the king’s stable, lieutenant of the French Guard and distinguished lord of Vaulogé, transformed his father’s castle into a splendid country residence.

Following various successions, the property was inherited in 1793 by Henri-Samuel Picot de Pontaubray, who decided to follow in his predecessors footsteps. During the Revolution he was constrained to emigrate to England and drowned off the English coast attempting to return to France.

Since the 16th century, Vaulogé has owned its chapel (dedicated to St Henry), built at the edges of the moat. It was restored in the 19th century. It was consecrated in 1832 for weddings and baptisms. A 1580 bell and a statue of the Pietà, damaged during the Revolution, were discovered in the altar. A 16th century clock, placed in a wooden box built above the entrance door served by a small wood staircase, was recently restored. Its mechanism turned one hand that imitated the hour shown by the sundial installed on the stables south tower.

Another small chapel, dedicated to St Roch, sits at the edge of the Fercé-Noyen (D309) road on the path leading to the castle. It was the place of pilgrimages until the 19th century as Saint Roch was invoked against pestilence, epidemics, cholera, diseases and certain fevers. 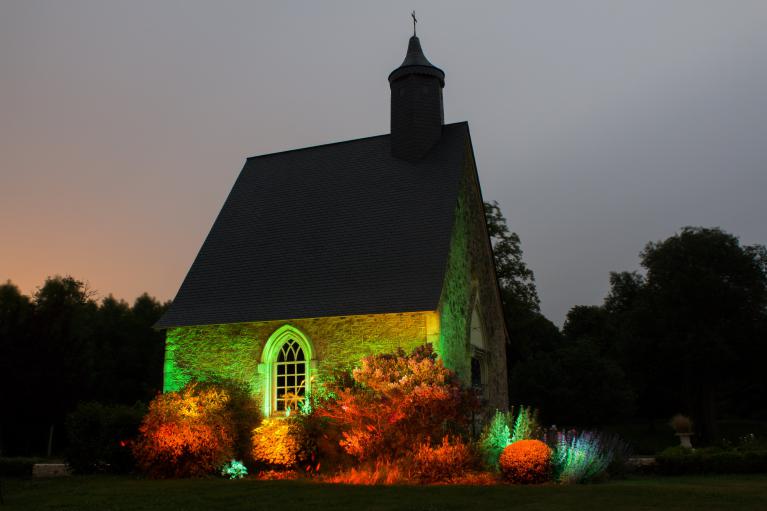 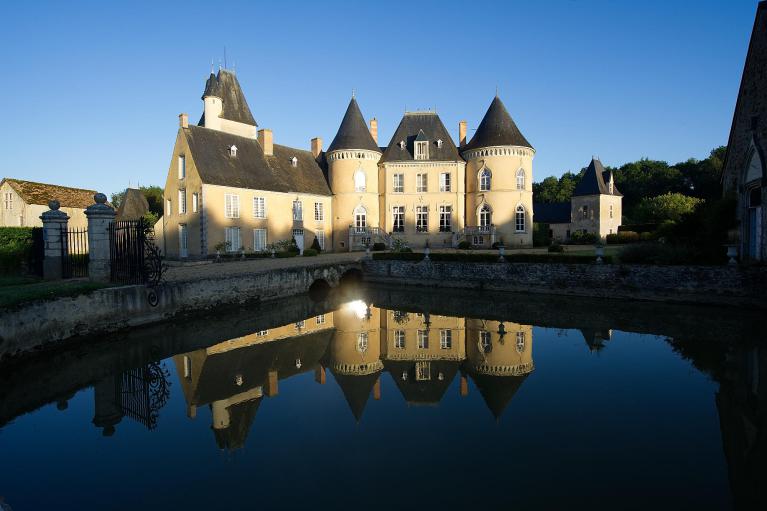 In 1831, a new castle came into being at Vaulogé. The ancient residence provided the core around which the new residence was built: an isolated pavilion bounded at its two extremities by two voluminous towers with conical tops. It’s Henri-Jean-Baptiste Picot who began the construction of a neo-gothic wing in order to close the floor between the old castle and the chapel to create a main courtyard. Designed by the architect Delarue, who restored the Le Mans cathedral, the new troubadour-style building was enhanced by an audacious decorative alchemy. The block leaned against the 15th century manor is composed of a rectangular building with at its centre a dormer finely sculptured of the Picot de Vaulogé coats-of-arms. All windows are surmounted of small geometrical patterns in the romantic style of that time. The entrance becomes more majestic: both towers have a door led by a staircase divided in two to form on each side a small entrance balcony.

The château de Vaulogé can be considered, all proportions kept, as an evidence of troubadour style of the 19th century.

Receptions or intimate weddings: © Annie Gozard for photos n°3, 4 and 5